Strangest Things Found While Moving Into a New Home 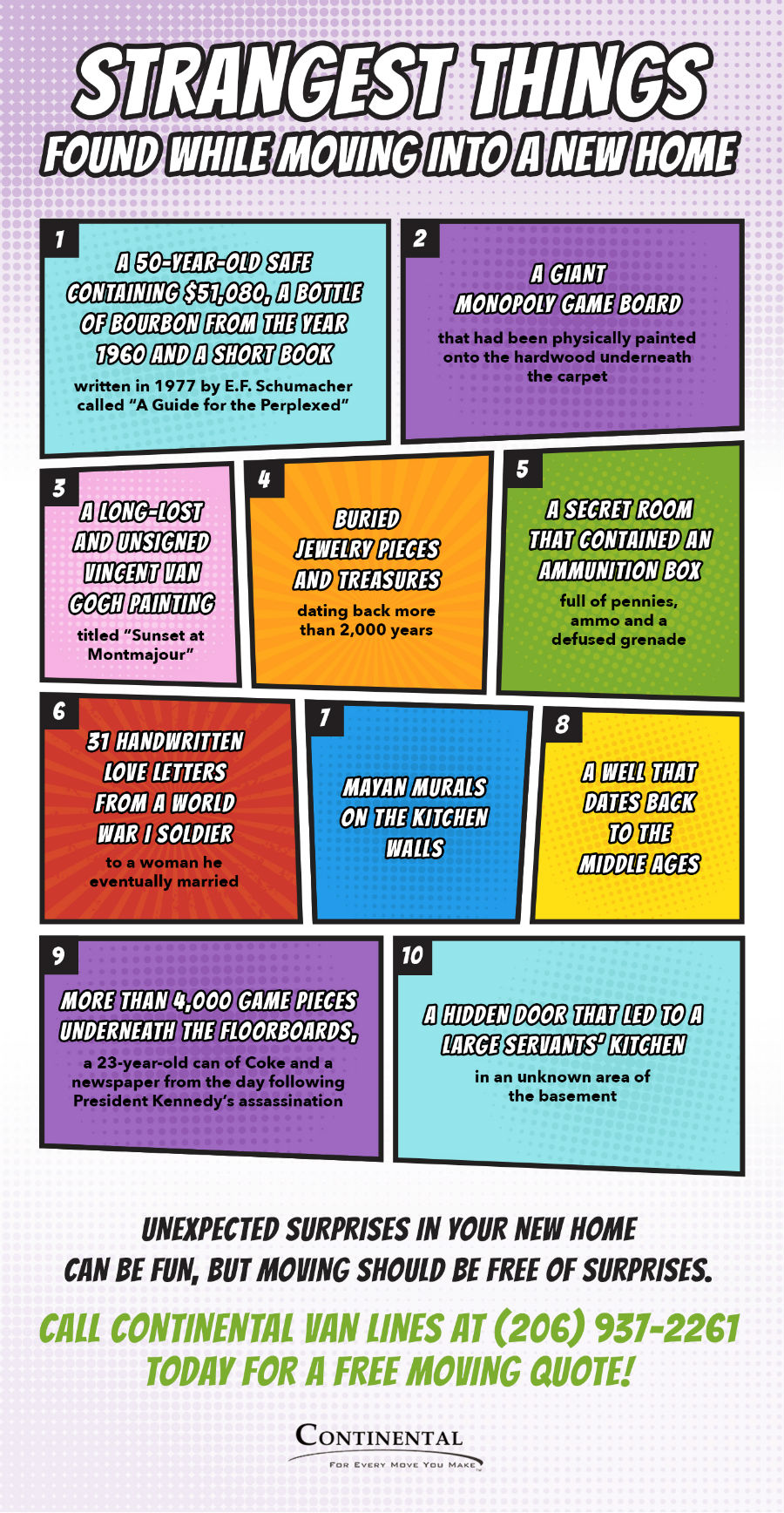 As children, many of us dream of finding a buried treasure map or other similar items that result in a far-fetched adventure, but as adults, we generally don’t think about what might be hidden in our homes. While you’re unlikely to find anything out of the ordinary when you move into a brand new home, there’s always the potential, however unlikely it may be, the previous owner left behind something truly bizarre.

Here are 10 of the most peculiar and unexpected things people have found when moving into a home that’s been occupied by previous tenants.

Soon after moving into their new home, one couple discovered an estimated 50-year-old safe hidden deep within their kitchen’s wall. Inside, they found a whopping $51,080 almost entirely in $100 bills, a bottle of bourbon from the year 1960 and a short book written in 1977 by E.F. Schumacher called “A Guide for the Perplexed.”

One couple decided to replace the carpet in their new home and upon ripping it up, discovered a giant Monopoly game board that had been physically painted onto the hardwood underneath.

A Treasure in the Attic

A long-lost and unsigned Vincent Van Gogh painting titled “Sunset at Montmajour” was found in the attic of a Norwegian man’s home. It is said that he originally placed it in the attic after being assured by an unknown individual that it was not truly a Van Gogh work because it was not signed; however, the piece was eventually discovered and authenticated by the Dutch Van Gogh Museum, where it is now on display.

A husband and wife discovered a number of jewelry pieces and treasures buried underneath their home. They sought the help of archeological dating experts’ who determined the items were more than 2,000 years old.

One person came across a secret room in their new home that contained an ammunition box full of pennies, ammo and a defused grenade.

Upon renovating their kitchen, one Guatemalan family discovered Mayan murals on the walls. Now that’s a paint job you simply can’t replicate!

One family discovered more than 4,000 game pieces underneath their floorboards. In that same home, they also found a 23-year-old can of Coke and a newspaper from the day following President Kennedy’s assassination.

Underneath the carpet in their living room, one couple found a well that dates back to the Middle Ages.

Two siblings, a brother and sister, came across a box hidden within the walls of their new home. Inside the box were 31 handwritten love letters from a World War I soldier to a woman. The siblings sought out the woman, returned the letters and to their pleasant surprise, she was now his beloved wife.

One family acquired a home that had been passed down through generations. After clearing out stacks of old junk and keepsakes, they came across a hidden door that led to a large servants’ kitchen in a section of the basement, of which they were previously unaware.

Unexpected Surprises in Your New Home Can Be Fun…

But nobody wants to experience any surprises or unexpected hassles during the move! If you’re searching for an unparalleled moving experience in which you’ll know exactly what to expect and how much you’ll pay, look no further than Continental Van Lines. We offer comprehensive residential moving services to help you and your family move from point A to point B as quickly and smoothly as possible. To learn more about our services and how we help take the stress out of moving so you can actually enjoy the adventure, contact us today for a free quote.