Cancer for College, originally founded in San Diego, California by two-time cancer survivor, Craig Pollard, is a non-profit organization that since its inception in 1994 has granted over 2.5 million in college scholarships to childhood cancer survivors across the country.

As a nationally recognized non-profit organization, Cancer for College is one of the few organizations which recognizes the terrible financial consequence families face after paying for a child’s life-saving cancer treatments. With savings depleted, there is often no money left for aspirations such as a college education. 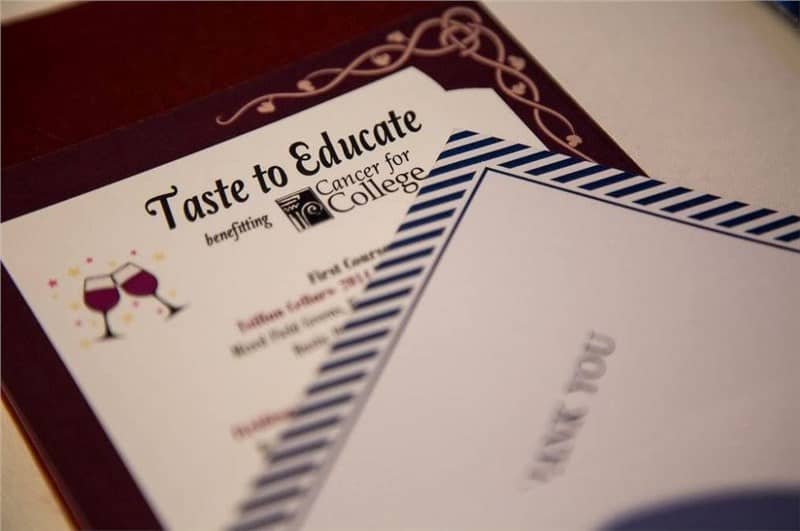 This year’s Taste to Educate was hosted by CFC’s Pacific Northwest Director, Abby Houck. At the age of nine, Houck was diagnosed with Acute Lymphoblastic Leukemia, and remained in treatment for over two years. Despite the lingering financial burden of treatment costs, Houck refused to let go of her aspiration to attend the University of Washington in Seattle. With the financial aid provided by Cancer for College, Houck fulfilled her dream and graduated from the University of Washington in 2012. She has since dedicated her time to helping other childhood cancer survivors achieve their dreams of attending college.

Guests of Taste to Educate were treated to a live performance from musical group, Rocky’s Revival, auction items featuring a signed Felix Hernandez jersey and tickets to a live comedy show performed by Will Ferrell and friends. The dinner featured a decadent four-course meal provided by catering company to the Seattle Seahawks, Tuxedos and Tennis Shoes, as well as wine pairings from Tsillan Cellars, Fielding Hills Winery, Chelan Estate Winery, and Cairdeas Winery.

In just three hours, Taste to Educate’s sold-out event brought in over $50,000 in college scholarship donations; exceeding last year’s contributions by over 40%.

“We are so honored to have had the support of local companies like Continental. With their help, we are able to continue helping childhood cancer survivors take back their lives and realize their dreams of a college education,” stated Houck.

This is Continental’s second year partnering with Cancer for College and sponsoring their annual Taste to Educate fundraising event.